Skype announced that its share of international calling minutes has jumped by 50% year-over-year. This data comes from a new report released by research firm TeleGeography.

According to this report, Skype’s share of international calling minutes jumped to 12% from last year’s figure of 8%. Telegeography says that the volume of traffic routed via Skype is growing at an "astonishing" pace. The following graph shows the net increase in international phone and Skype traffic from 2005 to 2009. 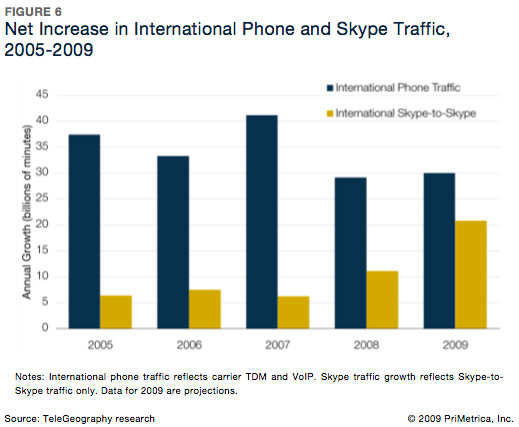 Skype retains its top spot as the ‘largest provider of cross-border communications in the world, by far’ according to the same report. Skype-to-Skype international calling minutes grew by 21 billion in 2009, a phenomenal acceleration of almost 100%. Telegeography strategy VP Stefan Beckert said at a meeting in Honolulu (why can’t we have meetings there?) that ‘he knew Skype hit a tipping point when his grandmother started using it’.

Sten Tamkivi’s presentation at eComm in Amsterdam explored some of the backstory behind Skype’s conquest of the international long distance calling space, and included some discussion of the reasons behind Skype’s increasing ubiquity. Definitely interesting viewing, if I say so myself, and there’s a transcript over at Skype Journal if you’d prefer to digest it in text form.

It should be noted, as Skype points out, that Telgeography has slightly altered its methodology for the report this year. The firm is now comparing international Skype-to-Skype minutes to the total number of international minutes to get the 12% figure. In the past, the Skype share included Skype calls to landlines and mobiles too.

Details of the TeleGeography report, which covers much more, can be viewed here. Samples can be downloaded.