PayPal has launched an update to its mobile app for the iPhone, iPad, and iPod Touch. It now has a donation feature that lets users donate to over 23,000 charities in the U.S., UK. and Canada.

"We hope the new application will simplify the donation process and help charities reach more donors," says PayPal Mobile Senior Director Laura Chambers. "We know most people want to contribute to causes near and dear to their heart, but many times the ins and outs associated with donating can get in the way of peoples’ good nature. I think Bill Gates said it best recently: The barrier to giving is not too little caring, it’s that giving is too complex. Today, we are a step closer to solving that barrier."

"As adoption of smartphones increases, donating via the mobile is also becoming more popular," she adds. "According to a study by  Pew Research Center in July 2010, 11 percent of Americans have made a charitable donation via text. By adding donations to PayPal’s iPhone app, we’re hoping to increase that percentage even more. With great new features like searching for nearby charities and the ability to post your donation to Facebook, we think it’s going to be a great boon to both local and international charities." 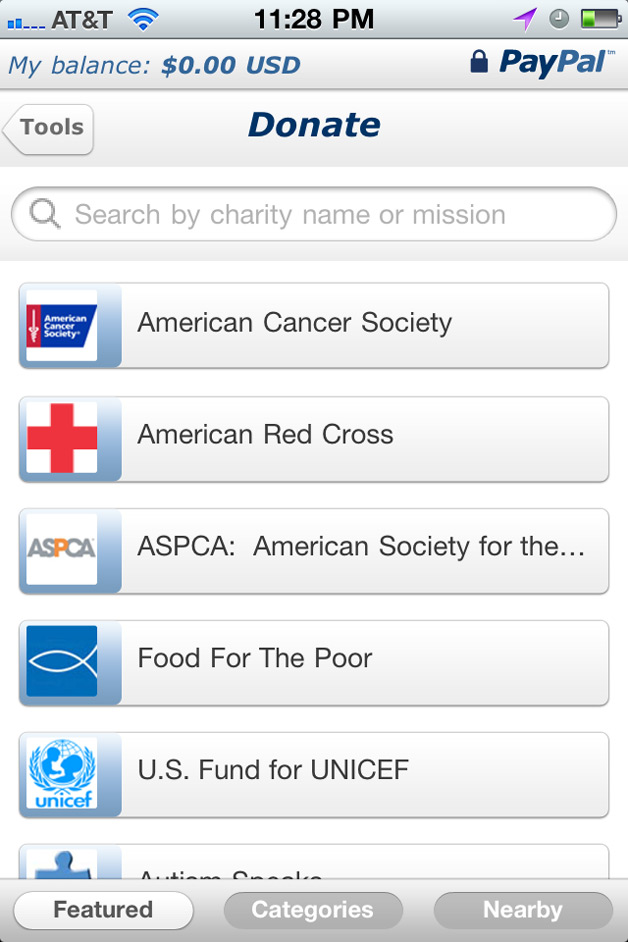 Sharing donations on Facebook could certainly help for spreading the word, creating a viral effect for donations. That’s great for charities.

Among the charities the app supports are: the American Cancer Society, Autism Speaks, Save the Children, UNICEF, BBC Children in Need, Cancer Research UK, and Canadian Red Cross.

PayPal says it submitted the app to the Apple App Store today, and expects to see it become available in the next few days.