Oscars to Get VIP Treatment Online

Disney/ABC Television Group is going all out this year for Oscar.com during the Academy Awards. A representative for the company tells WebProNews that they’re set to deliver "one of the most extensive live, interactive ‘second-screen’ experiences ever offered."

"Movie fans and film buffs will have unprecedented behind-the-scenes access to the 83rd Academy Awards from start to finish, beginning with the glamorous red carpet,  into the Kodak Theatre, backstage, and culminating  at the Academy’s official post-ceremony celebration, the Governors Ball," she says.

"The site will provide a level of access into an awards show never before experienced by an online audience and is designed to be perfect companion to the Oscar telecast," the rep adds. "On Oscar Sunday, Oscar.com will offer unparalleled access to a multitude of cameras, providing online users with the ultimate insider’s view of Hollywood’s biggest night." 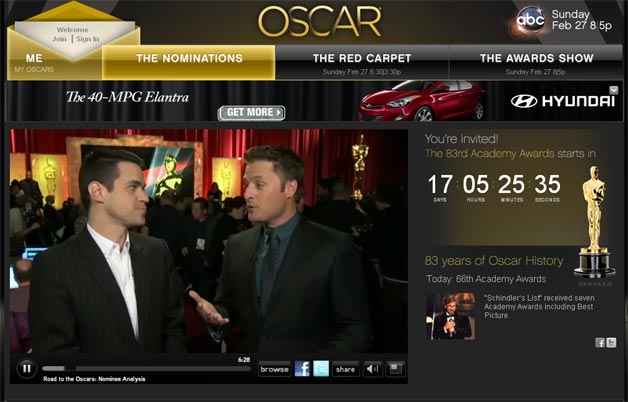 There will be special camera utilized specifically to provide live, behind-the-scenes footage via a "Thank You Cam". This will offer Oscar winners an extended opportunity to thank everyone they want, etc. in case they get cut off by the "wrap it up" music.

There will also be a backstage cam aimed at capturing sound bites, backstage happenings, short interviews, and more behind-the-scenes footage. Finally, there will be Control Room and Press Room cameras.

"Additionally, Oscar.com will offer a special ‘All Access’ premium feature that makes Hollywood’s biggest event even more accessible to movie lovers, allowing them to follow their favorite stars from the minute they set foot on the red carpet to the exclusive moments backstage and beyond," the rep says.

Users will have to pay $4.99 to get access to live video footage of the evening’s events from over 20 cameras and "direct their own experience on the red carpet and inside the ceremony". This will utilize "360 cam" technology to control multiple cameras using a computer mouse.

"All-Access" coverage will continue following the show, with special admission into the Governors Ball.

The Academy Awards are on February 27. The Red Carpet coverage begins at 6:30pm Eastern with the show beginning at 8:00pm Eastern on ABC.

Yahoo To Launch Digital Newsstand For iPad And Android Tablets

Blogs That Make The Most Money Put Content First