Roughly three years after its official debut, the Android operating system has more or less caught up to Apple’s offering in terms of desirability, according to Nielsen.  The research company declared Apple’s iOS and Android tied today after surveying potential smartphone upgraders in the U.S.

So we’re not accused of a pro-Google bias: yes, the graphic below shows that iOS has a slight edge.  But stats master Nielsen apparently decided the difference is small enough that the term "tied" still applies. 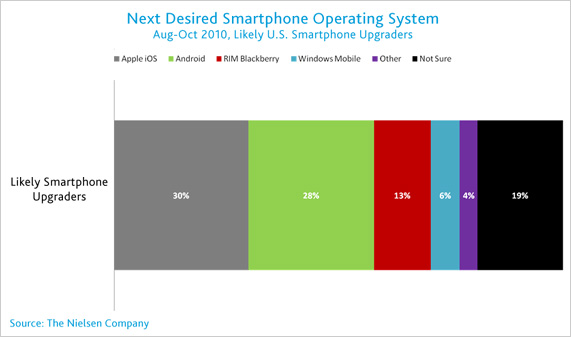 That assertion’s very important for Google.  First, it confirms Android’s success to date in becoming desirable, which is no small feat given the mind share and market share other mobile operating systems used to enjoy.

Second, it points to increased Android dominance in the future, since smartphone upgraders should be buying Android phones left and right.

Anyway, if you’re curious about how the data broke down, Nielsen reported in a blog post, "Among users planning to get a new smartphone, current smartphone owners showed a preference for the Apple iPhone (35 percent), while 28 percent of both smartphone and featurephone planned smartphone upgraders indicated they wanted a device with an Android operating system as their next mobile phone."

Also, "Women planning to get a smartphone are more likely to want an iPhone as their next device, with slightly more males preferring Android."