The worldwide mobile applications market is on track to be worth $17.5 by 2012, according to a new report commissioned by GetJar, the globe’s second largest app store.

Mobile app downloads across all handsets are estimated to climb from over 7 billion downloads in 2009 to almost 50 billion in 2012, a year-over- year growth rate of 92 percent. 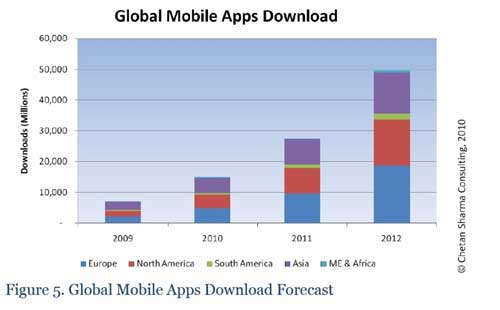 GetJar commissioned consulting firm Chetan Sharma Consulting to examine the rapidly expanding global apps market. The goal of the study was to look at the potential and real value of the mobile apps market worldwide.

Apps markets are evolving differently worldwide, indicating a need for creating different apps business models instead of a "one size fits all" approach. For example, the average app selling price (ASP) in North America was $1.09, significantly higher compared to ASPs in developing markets such as South America ($0.20) and Asia ($0.10).

*Advertising based revenue models have become increasingly popular. In 2009, advertising contributed almost 12% of the overall apps revenue. However, this share is expected to more than double to over 28% by 2012 – given the high proportion of prepay users in developing markets.

*The price of mobile applications can vary from $0.99 to $999, however the average selling price in 2009 was approximately $1.9. This is predicted to decrease by 29% over the next three years, although advertising revenue derived from apps is likely to stay relatively flat.

"With the consumer appetite for mobile apps rocketing, the opportunities for developers are huge," said Ilja Laurs, CEO and founder, GetJar.

"This report signifies a battle for survival of the fittest among app stores worldwide – with app revenue and growth opportunities growing significantly. There is no way that this many app stores will survive in the long term and while the value of the global app economy is set to be astoundingly high by 2012, we think only a few app stores will share this revenue."

Thinking Ahead Is Key To Business Success