It’s becoming quite common nowadays to show off when a discussing Internet browsers, especially when they launch. From Mozilla’s love of infographics and cool-looking maps, to Google’s use of “pop-up” reminders for visitors who show up sporting anything but Chrome, the browser war is every bit a display of who can pimp their browser the best, if nothing else.

In fact, the desire of the big three — Internet Explorer, Firefox and Chrome (sorry Opera) — to outdo one another runs so deep, new version releases like Firefox 4 and IE 9 are celebrated for about as long as it takes to create the pages for the upcoming versions. Granted, that’s overstating it some, but to say there isn’t an strong undercurrent of “the next big thing” feeling would be a mistake.

With that in mind, it appears has if Internet Explorer 9 is new enough to continue the celebration of its improvements, such as support for HTML 5. According to Gizmodo.com, in order to help flex some of IE 9’s new muscles, Soap Creative developed what they refer to as The World’s Biggest Pac-Man, a browser-based game based on the famous dot eating ghost chaser.

In order to earn its title, the game features a large number of user-generated maps. These individual maps are linked together to incorporate a much larger map, all of which must be cleared before the master map is considered beaten. So far, it’s not even close to completion; however, the fact these user-generated maps use the same style as the original game is a nice touch. 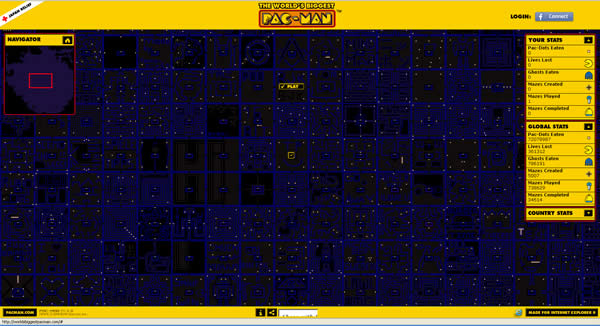 As you can see with the second image, there’s no mistaking which environment the game is celebrating, but that being said, when these screenshots were taken, the browser of choice was Firefox 3.6.12.

As mentioned, each tile in the main map links to an individual user-created map, of which, there are over 5000, provided the statistics are current: 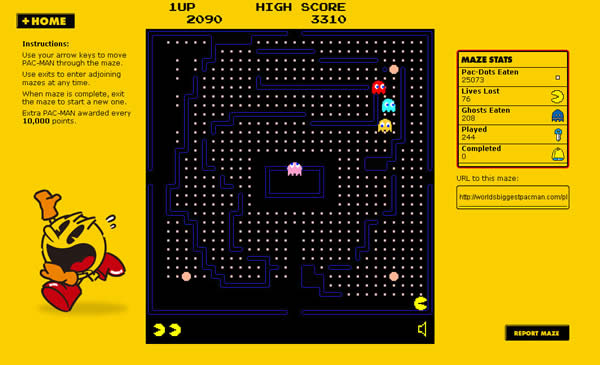 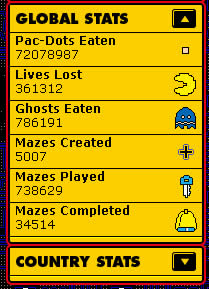 What’s next? User-generated Galaga games for Firefox 5? Actually, that sounds like a winner. Who knows? At the rate these browser games are growing, coupled with the competitive spirit of the developers and companies involved, it wouldn’t be surprising if Internet Explorer 10 has a working version of World of Warcraft embedded in its code.