Finally, the television and entertainment industries are starting to get it – their audiences are online, and that’s where they need to be, too. While studios and networks may groan about fans skipping out on live airings of their programs to watch shows online at their convenience, the execs should recognize that even the lowest-performing shows (in terms of ratings) still have dedicated online communities. It seems that more and more shows are recognizing this and trying to capitalize on these communities to help keep audiences engaged while still boosting ratings and sales. As Ignite’s resident TV and movie buff, I can point to HBO’s massive hit, True Blood, as one show that “gets it.”

Execs used various social tactics to launch the show back in 2008 and have kept the momentum going ever since. At launch, they created an Alternate Reality Game and several sites to help fans visualize the fictional world that the supernatural characters exist in. They also employed blogger outreach – bloggers were sent samples of Tru Blood, the synthetic blood that vampires on the show drink which allows them to coexist with humans by not feeding on them (stay with me here) – to pique the interest of potential cult followers. Oh, did I forget to mention that Tru Blood is now actually sold in stores?

HBO is working hard to keep the thirst of True Blood’s millions of Facebook fans and Twitter followers quenched with a constant mix of engaging channel management strategies and promotional campaigns.

To keep the momentum going, the show continues to stake its claim in the social space. The 7.8 million Facebook fans continue to stay active in the show’s absence, counting down to new premieres with other fans, sharing their favorite quotes and offering commentary or predictions – and the page admins aren’t leaving them hanging.

The page is regularly sharing content like exclusive photos and videos and, while there are many posts driving to the other properties like True Blood Withdrawal and the official HBO site, their posts are still seeing a relatively high level of engagement. Nearly all posts dating back the last couple of months generated 5,000+ ‘likes,’ with their two photo albums for the upcoming Season 4 raking in 32,000+ and 15,000+ likes. In my opinion, the admins have a good understanding of the need for a balanced content strategy – they’ve got promotional posts, the exclusive content fans are looking for, and engagement in the form of Facebook Questions, quotes, and short episode recaps. And while they’ve been guilty of using hashtags on Facebook (a big pet peeve of mine), I can’t fault them too much because their posts have huge returns. 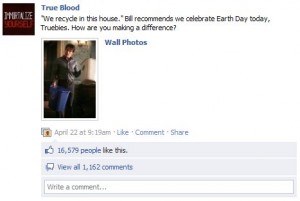 A couple of weeks ago, the page also launched the Immortalize Yourself application, which allows fans to incorporate themselves and their friends into an interactive exclusive clip from the next season. Fans can watch the video created with randomly selected friends’ names and profile pictures, or they have the option to “do bad things” by taking a quick friend quiz similar to Mad Libs in order to plug their friends into appropriate parts of the video. I used Megan as an example of a “friend who is likely to go MIA.” 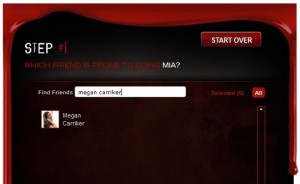 For dedicated fans of the show, it’s a great way to get active fans to share your content because it’s easily customizable and sharable – and for the fans, it’s an added bonus to feel like you’re actually a part of the show’s world and culture. 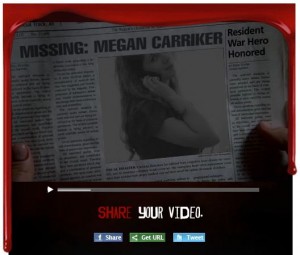 There is also a new TV spot that’s driving to an online promotion called True Blood Dig Deeper. I had watched the spots promoting the availability of Season 3 on DVD/Blu-ray, but I didn’t realize they were connected to an online promotion before starting research for this post. It’s actually a really, really clever game.

Essentially, fans watch the same commercial and identify 60 clues from the season hidden throughout within the 30-second clip in order to earn badges and to be entered to win the “Ultimate True Fan Experience,” a grand prize trip. Fans can watch the commercial multiple times, slow it down, zoom, pan… it’s clever in that it’s getting fans directly engaged and having them watch the spot over and over. It also ramps up the nostalgia and is a fun way for users to recap the previous season by recognizing elements they may have forgotten before the next one premieres. While some of the references are obvious, like the dog that shape-shifter Sam turns into, some are more obscure – like a blue sweater that one character wore for about 3 episodes – which could lead to hours spent playing along. I sent this site to a few of my friends who are fans of the show, and based on their testimonies, it’s pretty addicting. 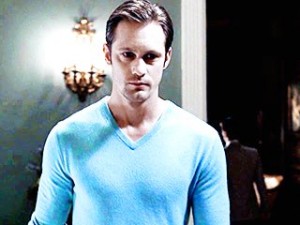 The show is a summer series, so fans typically grow impatient waiting nearly a year for the next season, a sentiment echoed in the tagline “Waiting Sucks” – pun intended. There are several sites where fans can stay in the loop, including the revamped Bloodcopy, “The Official True Blood Conversation,” which once served as one of the fictional blogs at the launch of the show. 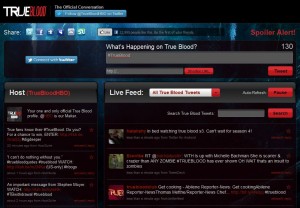 Here fans can find a live feed of all True Blood-related tweets, recent tweets from the official @TrueBloodHBO accounts and “Blood topics,” a clickable graphic of all of the most-talked about topics. The site even allows fans to connect their own Twitter accounts to get in on the conversation.

This page also aggregates tweets, with those tagged with #TBwithdrawal highlighting “the latest withdrawal victim.” Fans can see various feeds, connect their accounts, or engage in other activities to “feed their addiction.” Continuing to play on the puns, fans can also reach out to other “Truebies” suffering from “withdrawal,” or more cleverly, “check (themselves) in with GetGlue” to earn exclusive stickers and a chance to win a bottle of Tru Blood.

HBO has been promoting the #TBwithdrawal and #waitingsucks hashtags not only in their TV promos and videos, a trend I’m seeing more and more, but also with role-playing character accounts on Twitter. I’ve tried finding confirmation that these accounts are officially affiliated with HBO, but beyond the fact that the True Blood account follows them, I found nothing. Still, these fictional tweeters boast follower counts in the 20-30,000s, and the “characters” are regularly engaging in conversations around the show.

From what I can tell, True Blood is doing an excellent job of keeping its fans active and engaged all year round. The same goes for Sex and the City, another HBO favorite of mine, which continues to post content around the show (vs. the movie) regularly and host giveaways on their page, despite the show having ended years ago.

While I may watch a lot of TV, I’m sure there are a few niche shows that I’m missing out on that may be doing a great job in the social space. Are there any other TV shows out there that you think have a firm grasp on engaging audiences via social media?

iPhone 5 Release Date in September … No, August … No, September