To those of you not familiar with GroupMe and other group messaging apps, they allow users to create groups of family, friends or co-workers that will all receive any text sent by a member of that group through the app – it works almost like a text conference call.  I could start a group called “Golf Crew” and then my text “tee-time at 10” or my photo of the new putter I bought could easily be sent to everyone in the group.

GroupMe is one of the leading apps of this type.  Today they announced via their blog:

Today, we’re thrilled to announce another awesome feature of the GroupMe platform-Featured Groups. Starting today, we’re partnering with five amazing brands to help them connect with fans and bring some exciting, exclusive benefits to GroupMe users. They’re like private fan clubs for the things you love.

Since people often times forms groups based on events, bands and TV shows, GroupMe decided to specifically target those tendencies.  Users can create their own messaging groups or join larger groups centered around these featured topics. 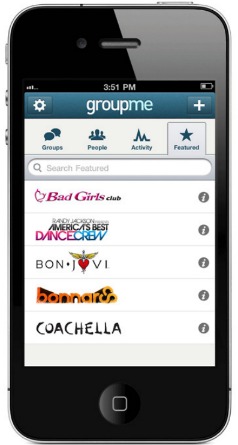 The first five featured groups are: Bad Girls Club, America’s Best Dance Crew, Bon Jovi, Bonnaroo and Coachella.  There are incentives for joining a featured group instead of simply creating a normal group and talking about these featured things.  Group members will have access to insider information and promotions.  For example, America’s Best Dance Crew groups will be provided with insider blog posts, behind the scenes videos as well as the chance to chat with some of the actual crew members as they will join specific fans’ groups.  Coachella fans will be the first to know about any lineup changes and Bon Jovi group members will be automatically entered in prize giveaways.

This begs the question, GroupMe users are regularly chatting it up about Bon Jovi?  Is GroupMe trying to target the aging 80’s fanatic demographic?

Although the jury is out on the buzz that can be created by Bon Jovi, there is great potential for GroupMe users to have some fun interactions with other bands, shows, films and events in the future.  There is obviously great potential for money to be made as well.  It would be interesting to know what GroupMe will charge to put something on its featured group list.  And how much marketing will be allowed to members of the featured groups?  Brands will have to strike some sort of delicate balance between no marketing and inundating users with T-shirt discount offers.