Google Opening Up Retail Options for Nexus One

Google has announced some changes to how it offers the Nexus One mobile device. Due to a disappointing turnout to its web store, Google is expanding the retail availability of the device. The company will work with partners to offer it to consumers through existing retail channels on a global scale like it has done in Europe.

In addition, Google wills top selling the device at its web store, and instead will use the location as a "store window" to show the availability of Android phones globally. 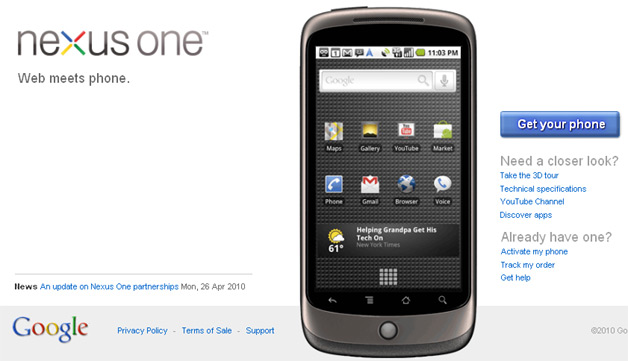 "We launched Nexus One in January with two goals in mind: to introduce a beacon of innovation among Android handsets, and to make it quick and easy for people to buy an Android phone," says Andy Rubin, VP, Engineering at Google. "We’re very happy with the adoption of Android in general, and the innovation delivered through Nexus One. Already, a lot of the innovation that went into creating Nexus One has found its way into numerous Android handsets, like the HTC Evo 4G from Sprint and the Verizon Droid Incredible by HTC."

"But, as with every innovation, some parts worked better than others," adds Rubin. "While the global adoption of the Android platform has exceeded our expectations, the web store has not. It’s remained a niche channel for early adopters, but it’s clear that many customers like a hands-on experience before buying a phone, and they also want a wide range of service plans to chose from."

Google I/O takes place next week, and WebProNews will be covering it (watch for live video). There should be a lot Android-related nuggets to report on.

Is a Lack of Search on Google Profiles Hurting Buzz?