At the Games Developers Conference, Google announced some new features for AdWords and AdMob to make it easier for developers to reach the right users and do so at scale. These include the ability to let users try apps before downloading (right from Google Search) as well as portrait videos, a new type of targeting, and a new monetization option.

In December, Google introduced Trial Run Ads for the Display Network. These ads are now being extended to Google search results in beta for select advertisers in the United States. When someone searches for a game, they can hit “Try Now” from within a search ad and try it out before installing it.

Only smartphone users on WiFi will see the ads, and they’ll be able to play a game for up to 10 minutes before deciding if they want to download it. The goal is for users who are most likely to spend more time using the app to be the ones downloading.

Google will also launch Portrait Video Ads in the coming weeks. These give users a full-screen experience in portrait without them having to re-position their device. Google says it has already seen these ads improve click-through and conversion rates. 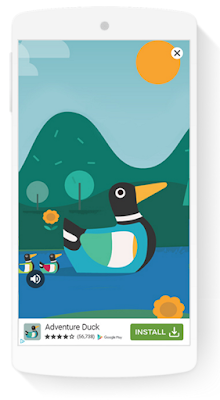 “Advertisers have long been able to control who sees their AdWords ads, and in the coming weeks we’ll be launching even finer options to reach high-quality users with Active User Targeting for Games,” says Sissie Hsiao, Product Management Director of Mobile Display Ads. “This new type of targeting for Android apps can show ads to users who have spent more than 30 minutes playing games, or who have played a Google Play Games integrated game in the last 30 days. Game developers can show their ads to game lovers, and combined with other types of targeting, such as a particular game category (e.g., Adventure), they can reach a very precise audience.”

“AdMob helps app developers around the world earn through in-app advertising with best-in-class formats and smart tools to maximize revenue,” Hsiao adds. “Increasingly, rewarded advertising is becoming a popular form of game monetization: users are given the choice to engage with ads in exchange for in-app rewards. Today, we’re introducing a way for developers to easily monetize apps with rewarded video ads from a number of ad providers in AdMob Mediation. Supported networks and platforms include AdColony, AppLovin, Chartboost, Fyber, Upsight, and Vungle, with more being added all the time. So if you’re a developer monetizing with these providers, you can easily manage and optimize them through the AdMob interface. It’s part of our ongoing commitment to provide app developers with a first-class mediation solution, and follows our recent launch enabling SDK-less mediation.”

Google is hosting talks and each day of the conference, and will be part of its main sessions on Thursday.