Google has introduced a U.S. Presidents Showcase to map the birthplaces of all 44 presidents to celebrate President’s Day (also know as Washington’s Birthday).

In Google Earth, users can see a progression of the states that voted during each president’s election (shaded in red). 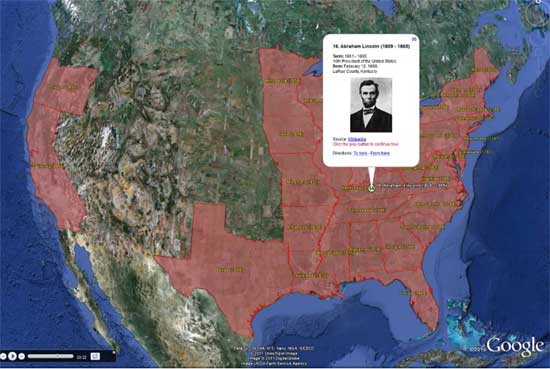 Other features as highlighted in the Google+LatLong%29″ title=”google earth presidents day”>Google Lat Long Blog include:

*Explore the White House, Washington Monument, Lincoln Memorial and other historical monuments in 3D and have students explain how architecture is used to honor people, concepts and establishments

*View a copy of the Emancipation Proclamation signed by Abraham Lincoln and map the areas where slavery ended, as well as the areas that were not initially covered by this executive order

PS3 Fanboys Stand Up for Sony