The acquisitive arm of Google reached out again today, and this time, grabbed DocVerse, a company that specializes in the real-time sharing and editing of documents.  The unusual thing is that DocVerse doesn’t deal with just any documents; instead, it focuses on Microsoft Excel, PowerPoint, and Word documents.

A post on the Official Google Enterprise Blog explained the purchase by stating, "[A]s we continue to improve Google Docs and Google Sites as rich collaboration tools, we’re also making it easier for people to transition to the cloud, and interoperate with desktop applications like Microsoft Office." 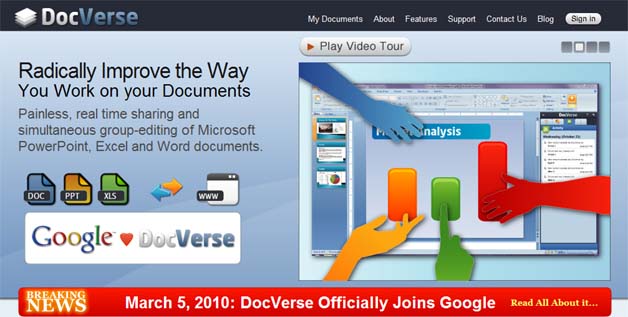 Then here’s another important piece of information, hinting that a significant integration or upgrade already in the works: "Current DocVerse users can keep using the product as usual, though we’ve suspended new sign-ups until we’re ready to share what’s next."

Anyway, DocVerse sold for $25 million, according to Jessica E. Vascellaro, which would appear to make it less expensive than Picnik and Aardvark, two other recent Google acquisitions.

It should be interesting to see what happens next, considering this development could correspond to either a small Google Docs upgrade or a major move against Microsoft’s software empire.