Numerous reports have indicated this week that Facebook is about to hit the 500 million user mark, and while there may be a big celebration, the social network isn’t slowing down in its quest for users.  Late yesterday, Facebook launched a new site that will provide some people with free and fast mobile access. 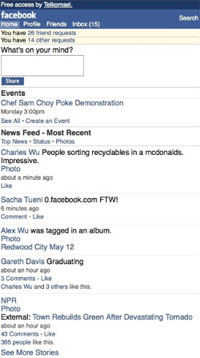 0.facebook.com actually represents an attempt to reach individuals all over the globe, as Facebook got 50 mobile operators in 45 countries to provide access to it with zero data charges.  Then, more specifically, the site’s targeted at folks who don’t have iPhones and iPads, and perhaps can’t afford all-you-can-eat data plans.

A post on the Facebook Blog explained, "[W]hen using the mobile internet, people around the world face two main challenges – sometimes the experience is too slow to be fun and the cost of data plans and understanding them can be daunting.  We have designed 0.facebook.com to help solve these two barriers and we hope that even more people will discover the mobile Internet with Facebook as a result."

Some of the countries in which 0.facebook.com is available include Indonesia, Malaysia, and Qatar, along with Australia, France, and the UK.

This move should help Facebook reach large new segments of the population, perhaps allowing it to hit the 600 million user mark much sooner than later.

May 19, 2010
Recent Posts
Registration is disabled.