When it comes to technology trends people are most excited about, online content delivery is at the top of the list, according to a new study from market research firm Chadwick Martin Bailey.

The study asked over 1,200 U.S. consumers ages 18-65 which of the recently hyped technologies they are most excited about. Topping the list was movie rentals via the Internet with 29 percent of consumers being "extremely excited" by this. Having the ability to surf the Internet via TV also came in high at 24 percent. 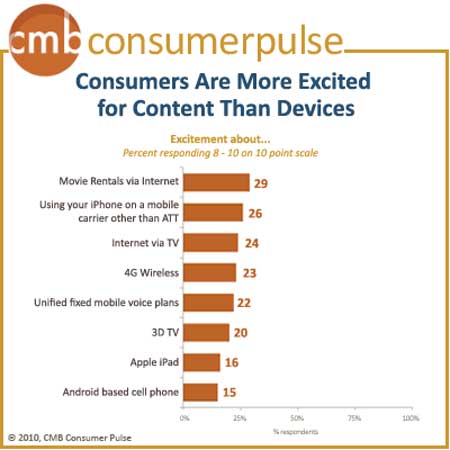 "After many years of media hype and false starts, we’re finally starting to see the concept of accessing feature-length films and TV shows through the Internet cross the chasm into the mainstream," said Chris Neal, vice president of Chadwick Martin Bailey’s technology practice.

"Industry developments like increasingly fast and ubiquitous broadband access, Netflix’s shift to online movie rentals, TV networks making more shows available on their websites, online video services like Hulu, growth in iTunes video downloads and massive peer-to-peer video sharing through social networks are all helping to break down the mental divide between a TV screen and the internet."

The second highest excitement ranking (26%) was the possibility of the iPhone being available on mobile carrier besides AT&T. In addition, 30 percent of people said they are highly to moderately likely to switch carriers to get a device their current carrier does not offer.

Excitement around Android based phones (15%) and the iPad (16%) ranked lowest on the list. For most consumers content delivery is more exciting than the device the content is offered on.

Are Credit Card Payments the Biggest Obstacle to Mobile Commerce?