Billboard has introduced a new chart offering called the “Social 50,” which ranks the most popular artists on social networking sites.

The Social 50 chart will track artists’ popularity using a formula blending weekly additions of friends/fans/followers along with weekly artist page views and song plays on MySpace, YouTube, Facebook, Twitter and iLike. Data from these sites is gathered and provided to Billboard by social music tracking service Next Big Sound. 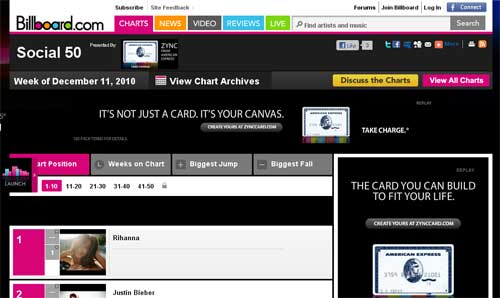 "The Social 50 provides a weekly snapshot of the artists that music fans engage with the most in the social arena, which in today’s world is a significant validation of their investment in an act," says Billboard Chart Director, Silvio Pietroluongo.

The Social 50 will focus on friends/fans behavior over other activities, followed by artist page views and song plays. The final ranking also measures the ratio of page views to fans.

The Social 50 will appear alongside other charts on Billboard.com and Billboard.biz every Thursday, and in Billboard magazine every week.