Update: AOL has now officially announced its acquisition of TechCrunch for an undisclosed amount. TechCrunch will continue to operate independently as a wholly-owned AOL unit.

"Michael and his colleagues have made the TechCrunch network a byword for breaking tech news and insight into the innovative world of start-ups, and their reputation for top-class journalism precisely matches AOL’s commitment to delivering the expert content critical to this audience," said AOL CEO Tim Armstrong. "TechCrunch and its team will be an outstanding addition to the high-quality content on the AOL Technology Network, which is now a must-buy for advertisers seeking to associate their brands with leading technology content and its audience."

Arrington said,  "Tim Armstrong and his team have an exciting vision for the future of AOL as a global leader in creating and delivering world-class content to consumers, be it through original content creation, partnerships or acquisitions. I look forward to working with everyone at AOL as we build on our reputation for independent tech journalism and continue to set the agenda for insight, reviews and collaborative discussion about the future of the technology industry."

Original Article: Rumor has it that AOL is getting ready to buy TechCrunch. An announcement is expected to come at the TechCrunch Disrupt event taking place this week.

Om Malik at GigaOm reports, "The deal is at a sensitive stage and might fall apart yet, but I don’t think so." Neither TechCrunch owner Michael Arrington nor AOL has commented on the matter.

This is not the first time a deal between the two companies has been rumored. In fact, it’s more like the third time, according to Nicholas Carlson at Silicon Alley Insider, who says the problem in the past has been valuation. 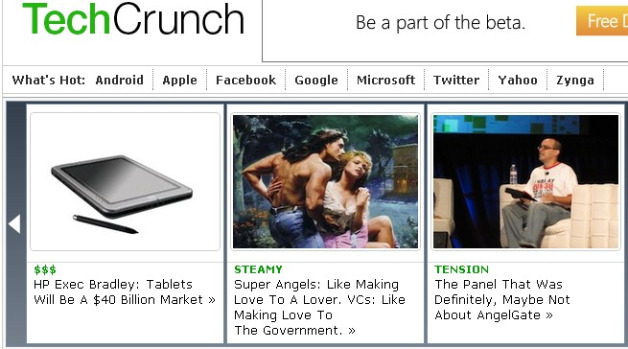 "During the second run, AOL wanted to buy TechCrunch for something a little under $25 million," he writes. "TechCrunch, in negotiations led by CEO Heather Harde, wanted closer to $30 million. AOL wouldn’t go there because it thought too much of TechCrunch’s revenues were from a conference business it didn’t entirely own itself."

AOL has rebranded itself as a content machine, and TechCrunch would certainly fit into this mold nicely. AOL already owns tech blog Engadget.

Yahoo and Ad Council Launch "Create for a Cause" Contest