Android Shipments Off the Charts

The smartphone market grew by 64% during the second quarter by Canalys‘ calculations. BlackBerry shipments grew by 41% and Apple’s share grew by 61% thanks to the iPhone 4’s release. However, it is Android that is getting the most attention from this report. According to Canalys, Android shipments grew by 886%.

"The latest release of our detailed and complete country-level smart phone shipment data for Q2 2010 clearly reveals the impressive momentum Android is gaining in markets around the world," said Canalys VP and Principal Analyst, Chris Jones. "In the United States, for example, we have seen the largest carrier, Verizon Wireless, heavily promoting high-profile Android devices, such as the Droid by Motorola and the Droid Incredible by HTC. These products have been well received by the market, with consumers eager to download and engage with mobile applications and services, such as Internet browsing, social networking, games and navigation." 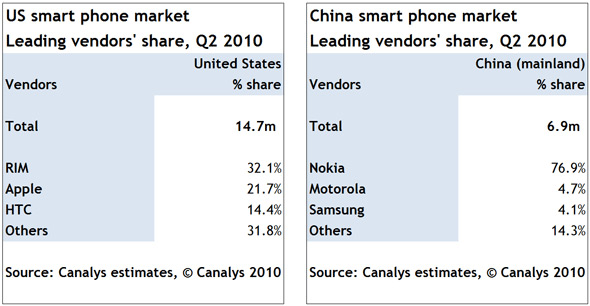 Android has one clear advantage over the iPhone and BlackBerry devices in that it a presence across manufacturers and carriers. With the smartphone market growing in general, it stands to reason that Android is a key beneficiary.

The U.S. smartphone market grew 41% year over year, according to Canalys. This is the largest smartphone market in the world with 14.7 million units, accounting for 23% of global shipments in the second quarter.

Android devices collectively represented a 34% share of the U.S. market in the quarter. The firm says that with growth of 851%, Android has become largest smartphone platform in the country.