The people who work on Chrome, Firefox, Opera, and maybe even Safari and Internet Explorer can take comfort in the fact that their efforts aren’t going unappreciated.  A new report from Pingdom indicates that a significant majority of Internet users are running the most recent version of their browser of choice.

Indeed, according to Pingdom’s analysis (which was based on StatCounter’s data), about 70.9 percent of all Internet users are up-to-date in this respect, and that’s not bad at all.  Apparently a lot of computer users manage to follow prompts or even seek out the latest software on their own. 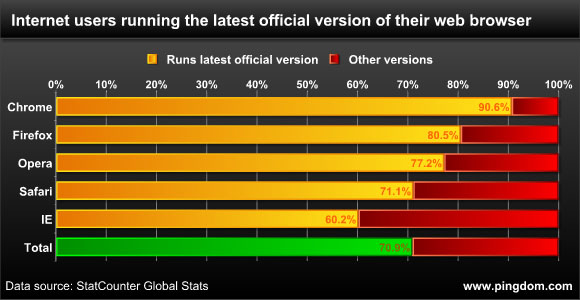 Of course, a couple of the data points may not deserve to be celebrated.  A post on the Royal Pingdom blog mentioned, "It’s not strange that Chrome ‘wins’ this since it’s currently the only browser with automated upgrades (they are handled in the background)."

This study still represents good news for developers and users, though.

Let’s just hope the "freshness" data doesn’t take too much of a turn for the worse when Internet Explorer 9 and Firefox 4 are released.