The ScoreCenter app will be available in the Samsung App store and allows users to view scores from a variety of sports. Personalization features allow users to customize the app by highlighting their favorite teams and leagues. 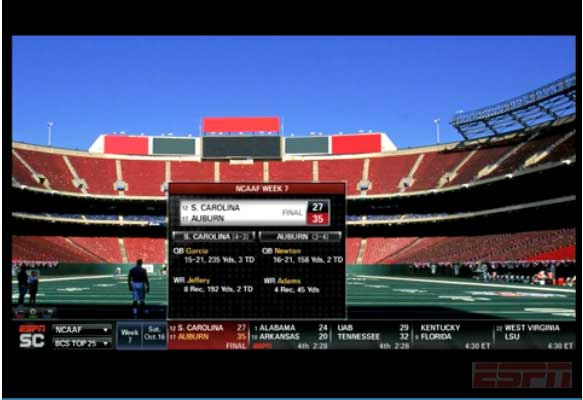 Time Warner Cable customers who have ESPN and have Internet service with the cable company will now be able to watch ESPN and ESPN3.com online starting tonight with “Monday Night Football.”

To view the content, Time Warner Cable customers can pre-register by visiting the company’s “My Services” section and verify they have a subscription. Customers can also go to ESPNnetworks.com or ESPN3.com to register or sign in to view content.

GMC has launched the “GMC Never Say Never Moment of the Week,” in partnership with the NFL and ESPN that allows football fans to vote on the best moment or play of the week that represents determination at nfl.com/gmc.

Twitter hasn’t verified the account yet, but both Chris Paul and CNBC’s Darren Rovell has confirmed it is indeed him. One has to ask the question, will LeBron announce his decision via Twitter?

Disney has announced it will offer applications from all of its businesses on Apple’s new iPad, including an ABC Player app.

The new ABC Player app will allow iPad users to watch free, ad-supported episodes of 20 ABC programs via a Wi-Fi connection. iPad users will also be able to buy downloads of episodes through the iTunes store.

With the 2010 NCAA Men’s Basketball Tournament starting next week (March 16), it’s no surprise the majority (83%) of fans will watch coverage on television, while 44 percent will go online and 10 percent will use a mobile device, according to a new survey by Unicast.